So it turns out according to a colossal amount of research that touching someone is good for health and mood; not just for the “touch-ee” but also for the “touch-er”.  Now, that is hardly earth shattering news. Being touched (APPROPRIATELY) whether in the form of a hug, gentle pat on the arm, holding a hand, back rub is shown to release neurotransmitters that positively affect the immune system, mood, self-esteem, blood pressure, and stress level.  It seems that there is nothing that even the slightest touch on the arm can’t bring about that is not positive.  Of course, there are caveats.  “Know your audience.”  Not all cultures will respond positively to an uninvited touch on the arm.  Nor, do all women necessarily want random men touching them on the arm or anywhere else. But the research is in:  touch activates skin receptors that send signals to the brain to release “feel-good” neurotransmitters and hormones that aid in boosting immune systems.  And, it does not take a scientist to know that touch, given in the right spirit and received in that same spirit, builds a healthy, uplifting psychological connection.

However, there is a “touching” that stuns with its radical compassion and fierceness.  And if we are honest we don’t quite know what to do with it.

In early November of 2013, Vinicio Riva and others traveled by bus to Vatican City, where they attended a morning public audience held by Pope Francis. Vinicio Riva who was in a wheel chair pushed by his aunt was just hoping to see the Pope. Vinicia suffers from a rare skin disorder that has left him severely disfigured with tumors all over his face and body. Neurofibromatosis is not contagious.

The following was reported By CNN World.

“I didn’t think we would be so close to the Pope, but the Swiss Guard kept ushering us forward until we were in a corner in the front row,” recalled his aunt.  “When he came close to us, I thought he would give me his hand. Instead he went straight to Vinicio and embraced him tightly. I thought he wouldn’t give him back to me he held him so tightly.”

(There are pictures of this encounter at the end of this post.)

Vinicio, accustomed to stares of shock and fear, was initially confused by the pontiff’s lack of hesitation. “He didn’t have any fear of my illness,” he said. “He embraced me without speaking … I quivered. I felt a great warmth.”

The entire encounter lasted little over a minute, and soon Vinicio and his aunt were back on the bus; Vinicio in a state of combined shock and joy.

“He was almost not himself,” Lotto said. “He was shaking.’’

“I felt I was returning home ten years younger, as if a load had been lifted,” Vinicio said.

The Huffington Post reported Vinicio as saying, “I’m not contagious, but he [the Pope] didn’t know that.  But he did it, period.  He caressed my whole face and while he was doing it, I felt only love.”

No words were exchanged, just the healing comfort of touch. “I tried to speak to say something but I was unable to,” said Riva in a translation provided by Time. “The emotion was too strong. It lasted a little longer than a minute but it felt as if it were eternity.”

Pope Francis no doubt gets his cue from the gospels.  Another story reported in Matthew, Mark and Luke tells the story of Jesus healing a man “filled with leprosy.”  Jesus broke with centuries-old cleanliness laws by touching, no, “grabbing” a man who fell on his knees before Jesus saying, “If you are willing you can make me clean.”  Jesus, filled with compassion, grabs the man and says, “I am willing”.  The desperate man is cured from one of society’s most dreaded diseases – a disease leading to disfigurement and death but only after a life of misery, pain, isolation, shame and loneliness.

Many through the centuries have also taken their cue from Jesus to radically touch and bless the severely disfigured from dreaded skin diseases and disorders.  St. Francis Assisi, Dr. Paul and Mary Brandt, Mother Theresa and so many others that will never make the radical touch-ers hall of fame on this side of heaven.

I was curious what leprosy might have looked like in first century Palestine.  Surprisingly, Google images revealed something that did not look so different from Riva’s disorder.  Now, here is where it gets a little odd.  When I viewed several images of religious paintings of the encounter of Jesus with the leper they showed something quite different from what would have been the reality.  Jesus is portrayed as “ other worldly” taking his finger and pointing it towards the man as if he was dispelling fairy dust and the man with leprosy looks a little ashen or at most smudgy, something that hot soapy water could fix.  Why was the disease’s disfigurement played down and why is Jesus portrayed as someone who is beyond getting down and dirty with the lowly?  I don’t know but here are two theories.  One, the artist does not want us distracted by the terribleness of the diseased man so that we can keep our gaze on the beautiful ephemeral Jesus, or, two, a painting to be displayed in a church or in the palace of a wealthy benefactor needed to be lovely and stunning to look at showing the magnificence of Christ .  While I understand the reasons it is a disservice to the heart of Christ and to those suffering.

So, would I do what Pope Francis did?  I need to honestly confront my limits and fears and ask sincerely what it means when Christ says, “When you do it to the least of these you are doing it to me.”  Wait a minute, I know what it means.  Compassion has no limits. It comes at a cost.  It certainly did for Christ, our Savior and Healer. I like to think of myself as a touch-er, hugg-er and kisser type of person.  I also like to think of myself as a follower of Christ, too. But, the call to be a radical touch-er?   Me? God help me. I mean it, Holy Spirit help me! 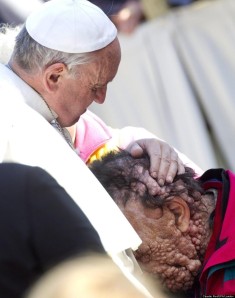 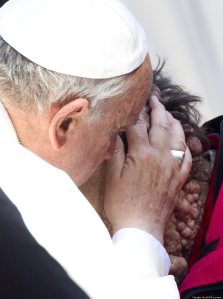